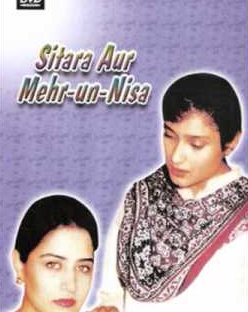 A review on Pakistani classic Drama TV Series, ‘Sitara Aur Mehrunissa’ (1992). Its Production and Distribution is done by NTM. Its Co-Producers are Rana Ghani and Anwer Khan whereas the Set Design is done by Zehra Jabeen.

Sitara Aur Mehrunissa aired on NTM in 1992. In total it consists of 11 episodes. The location for the shoot was Gulshan e Maymar, Karachi. The team behind its OST, song and lyrics are Javed Allahditta, Wahab Khan, Zohra Nigah and Nayyara Noor.

One of the lead characters has to go through a mental turmoil whereas other one has to suffer at the hands of her spouse. Sitara Aur Mehrunissa is Atiqa Odho’s debut TV drama series.

This drama serial was very popular at its original run and was screened during prime time television.

Sitara & Mehrunnisa (cousins) go along friendly but orphan Mehrunnisa has often faced hardships and taunting remarks by her aunt, Sitara’s mother. Ramis, a young apprentice of their father is interested in Mehrunissa whereas Sitara is left heartbroken. After these two girls’ marriages, both of them have to face some severe problems which change their lives forever.

i – The entire cast gave a very satisfying performance on their behalf.

ii – We have a number of strong ‘Star Power’ such as Atiqa Odho, Sania Saeed, Sajid Hassan including Anwar Maqsood as well.

iii – There was mild humor to lighten up the mood of the viewers.

iv – I am pleased to see the total number of episodes is only 11 to watch.

i – The story & the plot are … such a bore! It’s possible that perhaps at the time of its release, the story might be new and an inspiration to young adult females on how to handle such issues but now we have already watched many TV dramas similar to it.

ii – The characters are written just to fulfill the temperament of their respected roles but not to remember them by.

iii – There were times where this drama was so dull that I seriously considered of stop watching it (but had to for review purpose).

iv – After loss of the father, the mother is nowhere to be found or assumed dead as she never appears in further episodes. No explanation is given.

v – It was expected by its slow tone that the ending would be at best, average. But by the time finale came, I was least bothered.

+ Overall
Although Sitara Aur Mehrunissa has a strong cast and considered a classic drama but it is in best interest for the viewers to be left forgotten.