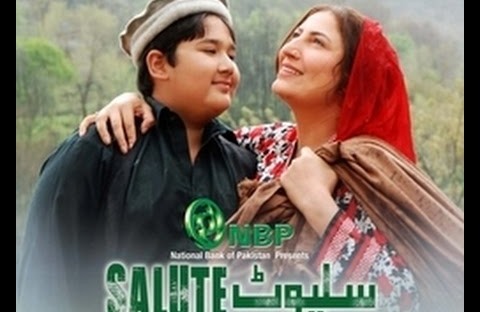 Salute is a biographical film is based on the life of martyr “Aitzaz Hasan” from Hangu, Pakistan. He very courageously confronted a suicide bomber from attempting to blow his school saving up to 2000 lives. It’s a Cinematic Tribute to his act of bravery and selflessness, therefore the film is titled as ‘Salute’.

The music is composed by Robin Ghosh (Late) & Aamir Munawar.

Shaheed Aitzaz Hasan Bangash is a healthy school boy who is often taunted by other school boys over his weight issue. His life surrounding his family is closely shown. His mother believes that God has created him for a special reason.

i – If one is aware of the true events which this film is based on, it was really heart breaking to know and watch film ending. You can see the love which is pour out by Aitzaz’s loving mother for his child. The film in the start is dedicated to the martyrs of Pakistan, especially innocent children.

ii – The performances by Ajab Gul and Saima Noor, played their part well.

iii – The locations are very beautiful as it is mainly shot at Azad Kashmir.

iv – The story shown of Aitzaz Hasan and his family are the only interesting scenes to watch.

v – Ali Mohtesham as Shaheed Aitzaz Hasan did the role properly and in most justified manner.

vi – The ‘Islam’ that is preached and how it is implemented by banned religious groups is shown to highlight their view of the religion side by side of general public. It was a good call.

i – The cinematography is mediocre. There is unnecessary Bird’s eye view multiple shots been taken throughout the film. Irrelevant intense shots in slow motion are taken where there is hardly any suspense shown to the audience.

ii – There are so many armies infiltrating and attacking shots taken. Not only do they look unrealistic but with highly exaggerating manner are they shown on screen. I do understand that they were inserted in the film intentionally to show our army patriotism and their fight against such ‘Islamic & Religious’ terrorist / banned groups. Yet it ruined the main story which it was actually based on.

iii – The beard of Nayyar Ejaz is as real as Santa Claus’s beard.

iv – Then we had this Bonanza ad during the film. Sorry, what I mean is there is this couple on honeymoon who are attacked by a small group of terrorists. Bad direction, bad acting.

v – The supporting cast acting is just okay. It could have been better.

vi – The product placement of NBP is like watching an advertisement. Badly executed.

vii – The story telling precisely needs improvement on its part.

viii – The flashback scenes and present scenes were hard to tell in the start as it looked the same.

ix – By looking at different aircraft while taking off, Aitzaz Hasan’s father saddens as it reminds him of his loving wife and family. But the way it was shot, it seemed that the BTS team has inserted wrong aircraft shots. Example: In close up shots, we see PIA plane but in master shots it belonged to some other airlines. This same thing happened again with Emirates and other airlines aircraft.

Salute is a touching story, surrounding Aitzaz Hasan’s true events which delivers so well. But it suffers from the uninspired cinematography, lack of strong supporting cast and its clichéd action sequence that provokes to wishful thinking for a redo.