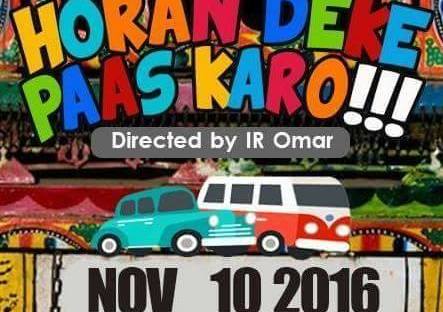 Tipu, a young lad who is fed up living with his parents. His father wants him to look after the plastic factory as his successor. But Tipu wants to fulfill his dreams, be with beautiful girls just like the macho man / his older brother Ali. But Ali is himself having problems with his girlfriend Rani who wants to settle down with him but he is not taking marriage into consideration.

i – The performances by everyone except Irma’s were greatly executed. Haris Khan was easily being judged as the best performer for this play. He showed everyone that he has the chops to do a brilliant performance. Haris Khan, you proved me right in front of my friends.

ii – As for Ahmer Hussain, it seems that he was born to do comical roles. Such a confidence level by this actor when he is performing; there is saying for him ‘Acting to os k nus, nus meh behri hai’ (Acting is filled deep into his veins). He is the ‘Akshay Kumar of the Stage’.

iii – The characters of Najma Kifayat and Owais Mubbashir were not as interesting as their performances. Both of them performed very well and due to their performance, the audience attention was magically fixed on them. Even as the play had ended and curtains were closing in, Owais refused to come out from his character.

iv – Naz is a wonderful actress and I must say she is gem of the new comers. It’s really hard to ignore those plays when she is performing in them. Although all the plays that I have attended of hers, she has played an older aged character. I personally refuse to believe that she is unable to play younger roles. I would prefer if in next upcoming plays she takes a role which is not only challenging for her but of a younger age character. I as well as the audience would be very interested to see her in a new kind of role.

v – The director did a good job in directing this play. With restricted comical moments, he still able to bring smiles and laughter on audience faces.

i – This play had light touch of humor. The comical performances especially by Haris Khan took this play towards the success otherwise there were hilarious moments in some parts of the play.

ii – It is a mystery for me whether Irma Ali is unlucky for getting dull roles or that she is an under performed actress.

iii – The character written of Owais Mubbashir could have improved; written it as interesting as Amma character played by Zarqa Naz. His character was too serious for a play like this.

iv – The set design was mild yet could be improvised as it did not look like a house of a bachelor and playboy type personality.

v – The transformation of Haris Khan did not create the level of interest as everyone was waiting for and was for short time only.

Horan Deke Paas Karo created such hype but did not meet its high expectations. Although, it is a good play but felt short of humor. Most of the characters were not as interesting as it promised it to be. The writing definitely needs improvisation while the performances by many were almost perfect.