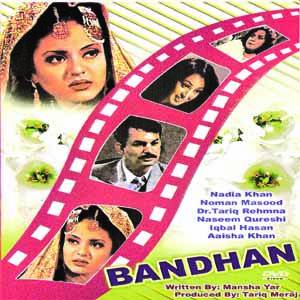 A review on Pakistani Classic TV Rom-drama series, ‘Bandhan’ (1996) aka [Relation]. The Production House is PTV Productions whereas its Distributor is PTV Channel.

+ Note
Bandhan was aired on PTV in 1996 and consists of total 13 episodes. It is based on two novels ‘Laggan’ and ‘But Shikan’, written by Bushra Rehman. It is the last drama of her for PTV. It was a block buster drama from PTV Islamabad center.

This TV drama was considered lucky for many associated persons from director, writer to cast members. Leading cast members Nauman Masood, Nadia Khan, Farah Sadia and Iqbal Hussain were all in the early stages of their acting careers. The success of Bandhan provided fame to its entire cast.

Farzana Ferri belongs to wealthy family and is the spoon-fed, sole daughter of her parents. Her father wants her to be independent and settle down to a nice chap. One day, Afaq, Ferri’s boss sends marriage proposal to her home. Surprising to her father, Ferri gladly accepts it.

i – Nauman Masood’s performance is quite good and interesting to watch.

ii – Nadia Khan as Ferri played well as spoiled brat who eventually learns from mistakes and patience she earned during the time of marriage alone with her husband. Other Honorable Mentions: Naseem Qureshi, Farah Sadia/Hussain and Iqbal Hussain.

iii – Its screenplay is the key point for this drama series.

iv – The misfit relationship between the married couple.

iv – Visually it was splendid to see its nice ending.

i – Such a cute, romantic, lovely story of <B-O-R-I-N-G!> two bought up differently by their parents.

ii – After the feud between the two, the rest of episodes were such a struggle as if to fulfill the achievement of total 13 episodes.

iii – The subplots of Ranu and her marriage while Bilaves and her relationship with Perri were just average to watch.

+ Overall
Bandhan is a TV series of lackluster affair with a very short story to tell.