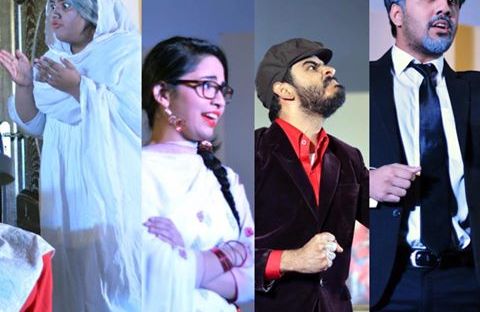 + Note
Wakeel Sahab’s script was originally written in Hungarian. This play has been conducting for several days yet usually performed consecutively late by almost an hour or so.

+ Plot
An unusual friendship between the two very contradictory persons that is Phoja Daku and Khizer Hayat Qasuri. It shows how the lawyer’s irrational desire to get famous in the society through any means necessary. Although his wish does get fulfilled but only by getting himself involved in deep jeopardy!

+ High Points
i – Eye candy performance by Kulsoom Fatmia as Shakeela. She performed her role with ease and gracefully. Although her character was written weakly but due to her good performance, she was able to make a curious character to watch. The audience would love to watch her performance in other upcoming projects.

ii – Hammad Ather played the main supporting role much better than rest of the cast. His good acting experiences have made the role of Phoja Daku as exciting one. Other Honorable Mentions: Waleed Nasir and Yogeshwar Karera.

iii – Audience might enjoy ‘Wakeel Sahab’ who are new to watching theatre plays.

iv – On some occasions, there were light gags to be entertained such as can not steal chained objects, taking selfies, emotional blackmailing…

+ Low Points
i – Same repeated mistakes of trying to make audience laugh by ‘Looking and Acting Funny’. People do not laugh WITH you but AT you.

ii – Amateur Performances by most of the cast members, especially by Vania Shakeel and Rao Jamal Nasir.

iii – In the first forty minutes or so, it was hard to know to what exactly is the main plot? During the time I wondered why the play is named ‘Wakeel Sahab’ if it is keep focusing on the sub plot that is the two different personality guys who are highly interested in the two sisters.

iv – The screenplay was poorly written with outdated jokes and cheesy punch lines.

v – Since I know the director and his work well therefore the level of direction was executed very poorly. For me it is a mystery, whether he really directed this play or only his name was used?

vi – Several flaws of this play made me kept losing interest to watch while making serious efforts not to fall asleep.

vii – Set was terribly designed. There are multiple single doors just besides each one that indicated as though we are looking at public washrooms. On every side of the double window we have vases / lamps kept while over the same window we have painting / photo hanging on the wall.

viii – Lights were too brightly lit for the play, over exposed.

ix – Almost every main character kept talking to themselves (in substitute of voice over) to let audience know what he / she is thinking of.

x – When was the last time a role was written for a female to perform as a strong, independent brave woman who contributes a vital role for a play? However in its place what we (as audience) are usually presented the female characters as ‘Damsel in Distress’ or ‘Love Interests’.

xi – Why would someone make an effort in stretching out his / her leg to intimate with someone if that person is already sitting just next to you?

+ Overall
To direct Wakeel Sahab, the director ultimately makes a mockery of himself with forced humor, middling performances and weak screenplay.